Purchasing a Haunted House in 2022

With Halloween just around the corner we thought we would take a look at buying a home that has paranormal activity. Would you buy a haunted house?

If you said yes, you’re not alone. According to new research, 73% of Americans say they’d consider purchasing haunted real estate in a competitive market (but 52% say they wouldn’t pay full market value).

Read on to learn more spooky stats and freaky findings from the survey.

76% of Americans Believe in the Supernatural in 2021

Of those supernatural believers, 44% say they’ve experienced more supernatural events since the start of the pandemic. Millennials are 3x more likely than boomers to report an increase in supernatural activity. 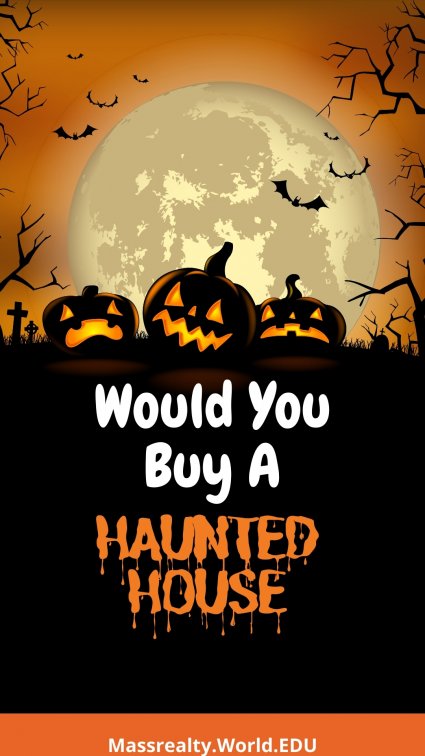 44% of Americans Believe They’ve Lived in a Haunted House

Perhaps with 71% of Americans with remote-friendly jobs now working significantly more hours from home, there’s more opportunity to observe ghostly comings and goings than in the pre-pandemic days. In 2020, just 24% of Americans believed they have lived in a haunted house.

Some Things Are Scarier to Homeowners Than a Haunted House

Only 5% of respondents said ghosts were the scariest part of homeownership. Homeowners, instead, are more afraid of:

Whether you’re buying a home for your family or are an investor taking advantage of a 1031 exchange, there may be worse things than ghosts when it comes to living in or flipping a home.

If the potential for ghosts or other paranormal activity is there it may be one of the questions you ask when buying a house.

Although American homeowners fear floods, tornadoes and other natural disasters (54%), fires (49%), and other hazardous threats, many households don’t have basic safety features in their homes.

Ghosts Are Not a Top Deal Breaker for Most Americans

Nearly half (48%) of Americans would rather purchase a haunted house than live within a mile of a dump or waste management facility. Other deal breakers that top home buyers’ lists include buying a home near the scene of a violent crime (47%), a former meth lab (45%), or within a mile of a prison (44%).

Many homebuyers are also not interested in property located next to a cemetery (39%), where someone died of natural causes (26%), or with an address featuring “666” (33%).  It might take some sleuthing to know if your potential home has a haunted or notorious history, but if it means you’ll be more comfortable knowing, it’s time well-spent.

Buying a home in the 2021 ultra-competitive housing market is tough, and 73% of Americans said they’d consider purchasing a haunted home — up from 59% in 2020 — especially if there were other benefits to offset the occasional paranormal activity.

A surprising 27% of respondents even said they’d be willing to pay above market value for a haunted house.

For the most part, though, 63% of respondents said they’d consider a haunted house if it came with a lower price tag. Respondents also said they would consider one if it had:

In a competitive market, buyers have less opportunity to be selective based on limited housing stock.

Buying or Selling a Stigmatized House in a Competitive Market

Although many homeowners apparently feel comfortable sharing their space with spirits, others said they would put their home on the market immediately under certain conditions, including if objects moved or levitated on their own (45%), they saw a ghost (37%), or their children suddenly behaved strangely in the home (40%).

Others said they’d move if a serious crime was committed nearby (38%) or if they learned about a crime previously committed in the home (34%).

Buying or selling a stigmatized home in a competitive market can be either a blessing or a curse, depending on which side of the buying/selling coin you’re on. A home might be stigmatized from its reputation for hosting paranormal guests, but it can also suffer from negative associations with infamous crimes, violence or other unfortunate events that may have occurred in or near the home. A famous home featured in movies or TV might also be stigmatized if it attracts an endless stream of tourists or fans.

Because stigmatized properties are harder to sell — typically they sell for 3% less and take 45% longer to sell — buyers willing to overlook the negative psychological impact of such a home may be able to get a bargain. As a buyer, tell your real estate agent that you’re open to the possibility of a haunted or other hard-to-sell home if it means you can make an offer that allows you to stretch your dollars further.

Keep in mind that even if the house you’re buying is stigmatized, you still need to do your due diligence, especially if the market is ultra competitive. Make sure your credit score is healthy, your financing is in order, and this is the right house for you. Remember, chances are, you may encounter the same challenges in eventually selling the home in the future.

Homeowners desperate to unload a stigmatized home and move as quickly as possible should be aware of the disclosure laws in their state. Some states require that sellers inform buyers of any stigmas associated with the property, but 62% of the survey’s respondents said they wouldn’t disclose a haunting to potential buyers if possible, (including 10% who would refuse even if the law required it).

Work with a broker who can help you frame the sale as an opportunity for buyers looking to make a wise purchase and don’t mind working with, rather than against, the notoriety.